I am the owner and a pilot for Apex Helicopters. I wanted to write to express our sincere appreciation for the hospitality the entire Aurora Airport showed Apex Helicopters when it arrived on September 8, 2020.

Apex Helicopters operates an Airbus AS350B3 Astar, helicopter, for the State of Oregon Department of Forestry (ODF) as a helitack platform. The helitack platform includes a ODF helicopter manager, 8-12 ODF fire fights, 2 chase trucks and a helicopter fuel/service truck. This aircrafts primary responsibility is to provide initial attack (IA) on wildland fires. The programs goal is to launch quickly and respond to wildland fires as soon as they start in an effort to keep the fires small. On a typical mission the aircraft launches with the pilot plus 4 fire fighters onboard, the crews line gear, tools and chainsaw in a cargo basket, plus a 180 gallon water bucket. The crew is placed on the fire to begin initial attack and fire line construction. The aircraft  then assists the crew with water drops from its bucket or may use a long line to sling in additional equipment as needed.

As we all are aware on September 8, 2020 dozens of fires started in the Cascade Mountains and rapidly became large events. Some of these fires moved as much as 17 miles in the first day causing the destruction of property, structures and leaving many people without a place to stay. The ODF helitack platform was moved from its primary base in John Day to assist with the mission of stopping the fires. We landed at the Aurora Airport shortly after 1600 on the afternoon of the 8th. Within 20 minutes of landing the crew and aircraft were dispatched to a fire near Scotts Mills to provide structure protection.

Upon our arrival at the Aurora Airport we were greeted by numerous airport personnel and local hangar owners asking how they could assist and what the airport could do to help with the fire mission.

One of these people was Jon from Lynx Aviation. He truly opened up his entire facility to our helicopter and the ODF Helitack Crew; in addition, to the 2 National Guard Blackhawks and a UH1 bucket helicopter. He extended a warm welcome by allowing the entire crew to stage in the FBO between missions, provided water, coffee, a comfortable place to relax and even allowed a fire fighter to do his laundry while there.

In addition, Ted and Michelle Millar immediately introduced themselves and offered anything they could to assist Apex Helicopters and the fire fighting effort. Apex needed to conduct some routine maintenance while at the Aurora Airport; Ted graciously loaned a hangar to Apex so its crew could conduct this maintenance in doors.

Apex works throughout the Western United States and I believe it is safe to say that the welcome and generosity we received from the Aurora Airport is second to none. It is people such as this that make the fire fighters feel welcomed for the difficult job they do. 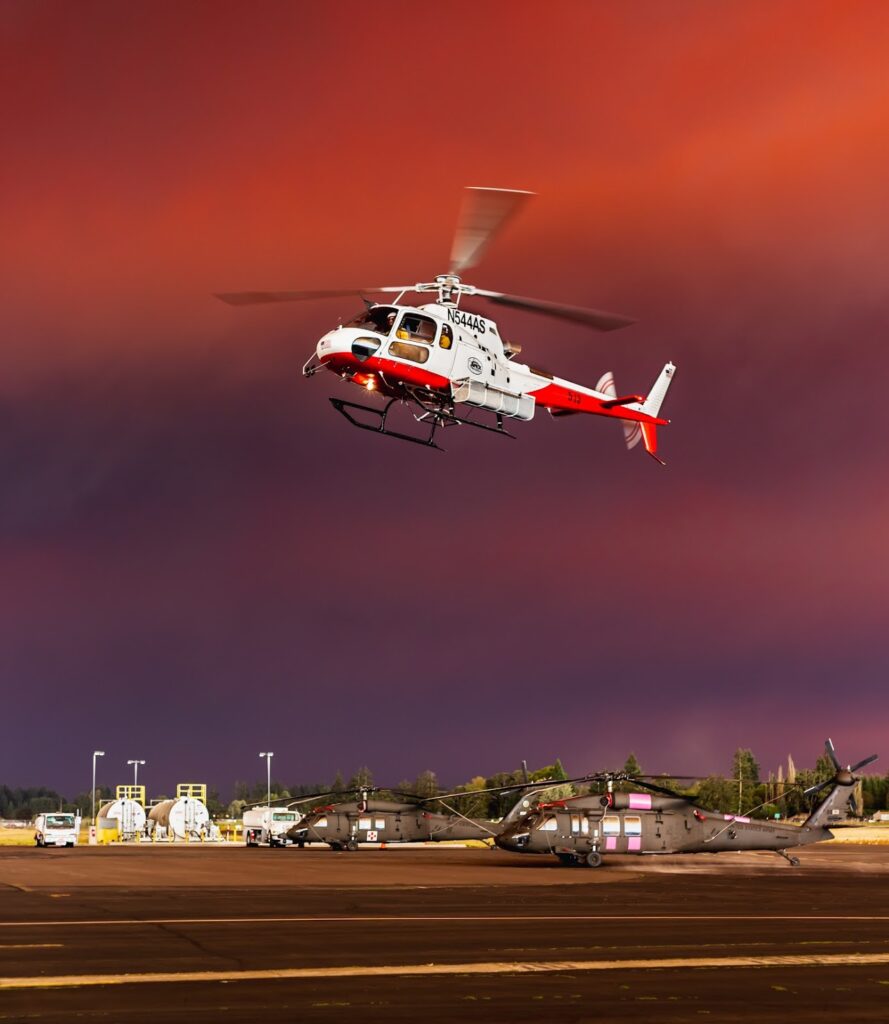